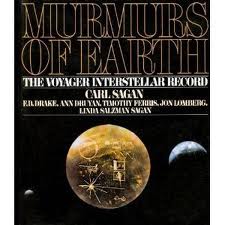 The other night I hosted a dinner party. One of our guests worked at JPL. I brought out my copy of the box set Murmurs of Earth, published by Time Warner about 20 years ago. It’s one of the box sets I saved when moving and downsizing last summer, because it’s rare and amazing. Even the book’s dedication: ”To the Makers of Music—all worlds, all times” is astounding.

The Voyager Spacecraft has fascinated me, not because I have a scientific mind, but because there are so many interesting things about it. Among them are the fact that President Jimmy Carter wrote a letter, put on the time capsule aboard the spacecraft, that implied an awareness that otherworldly civilizations might be out there. Second, that there was a music soundtrack on the time capsule, put together by Carl Sagan and Alan Lomax, that included classical music, jazz, blues, and world music. Third, that Voyager is still out there, 40 million+ miles away, still pinging earth from deep space after 35 years.

Jimmy Carter once saw what he thought was a UFO. Perhaps that was his interest in becoming more involved with not only space exploration but with funding it as well. Whatever the case, The Voyager Spacecraft remains an amazing human feat, parlayed with amazing vision and with vast implications. I hope that extraterrestrials someday discover who we were, what we were made out of, what earth was like, and perhaps even discover a Scott Joplin rag, some Bach or Louis Armstrong, or even some Southern blues by Blind Willie Johnson, all permanently encoded on the gold record in the time capsule aboard the craft. 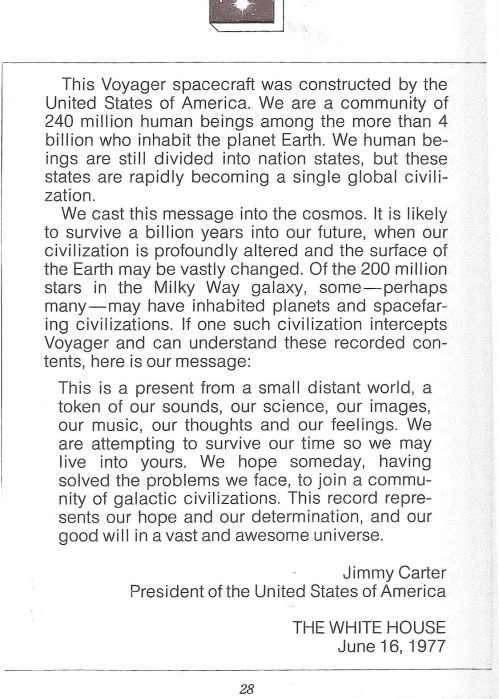 Voyager Spacecraft Statement by the President.

Here is a link to the contents of the Voyager Golden Record:

Here is Blind Willie Johnson’s song “Dark Was the Night, Cold Was the Ground” which is now way out in the universe for other beings to enjoy and frame a picture of us earthlings.