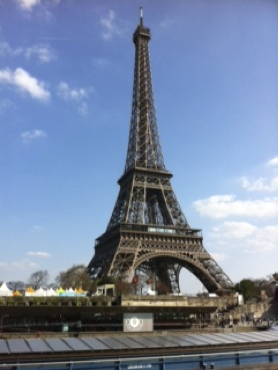 No trip to Paris is complete without a stroll alongside the Seine to take in the sights and sounds of this charming city, paired with some café lounging and people watching, museum hopping, and in my case, exploring the City of Light by tracing Hemingway’s footsteps before he cheated on her with Spain and Cuba. It was propitious that I stayed in the Latin Quarter a stone throw away from the University of Paris I Pantheon-Sorbonne, University of Paris Faculty of Law, University of Paris Faculty of Medicine and several Institutes of Higher Education in Fine Arts, Agriculture and Engineering. Dropping into these campuses and seeing the facilities and rubbing shoulders with hip philos standing on the sidewalks taking long puffs on their Marlboros (smoking is no longer permitted inside buildings) engaged in friendly and at times heated banter, walking past outdoor cafes, sandwich stalls and gyro stands on Rue de Mouffetard where inexpensive and tasty fare satisfies the college student’s budget was the visceral experience (albeit brief) I had of the life of a French university student. 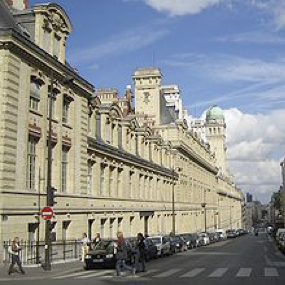 Rue Saint-Jacques and the Sorbonne in Paris 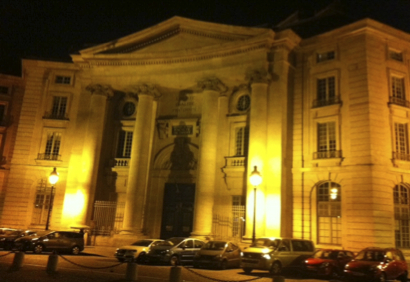 University of Paris, Faculty of Law 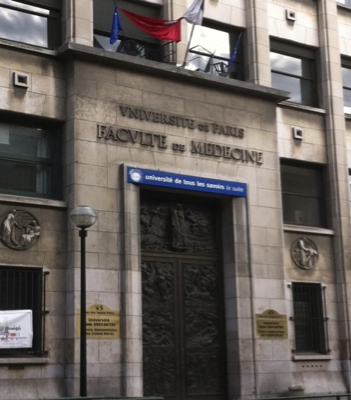 University of Paris, Faculty of Medicine

My meeting with Celine Ouziel, Educational Adviser with Education USA at Fulbright Franco-American Commission in Paris and Patricia Janin, head of the American Section at Fulbright proved mutually enlightening. I learned of some of the problems French students have in obtaining original sets of their academic documents, when institutions tend to issue one set and will not reissue additional official copies and the lack of a cohesive approach in the U.S. to recognizing the classes préparatoires (two-year post-secondary program required for admission to the Grandes Écoles).

Like most things in life, nothing is static and the French education system, once regarded as one of the best in the world, is being questioned by French academics and teachers, and in the media, especially, on the question of the “level” of the baccalauréat examination. “Many academics complain that the baccalauréat these days is given away, and that this is a major cause of the high failure rate in the first year of university.” Source: http://about-france.com/primary-secondary-schools.htm The jury is out; French Ministers and civil servants claim that this is not the case and so the debate goes on.

Despite the grumblings from the academics and French media, when it comes to getting admitted to a university in France, the baccalauréat is the gold standard. But admission to a grande école, seen as “the peak of the education pinnacle in France, relatively small and highly selective “schools” (in the American sense of the word),” is not only the baccalauréat but completion of the two-year classes préparatoires at a Lycées (which in this respect, are also a part of the French higher education system). The Grandes Écoles “provide a cosseted higher education to the nation’s future elites – tomorrow’s “haut fonctionnaires” (senior civil servants), leaders of industry, top military brass, top politicians, engineers, physicists and others.” Source: http://about-france.com/higher-education-system.htm

The debate inside France continues to pit academics and media against ministries and civil service departments. In a meeting at the Fulbright office, I attempted to dispel myths on U.S. higher education, especially our community colleges and the myriad of benefits of attending a community college before transferring to a four-year university, as well as ACEI’s credential evaluation policies concerning the baccalauréat examination and the classes préparatoires for which we recommend some advanced standing credit. Our evaluation policies, in line with decades of established national guidelines, was welcomed, though at first it was met with surprise, especially where it concerns the credit allowed for the classes préparatoires. It seems the practices of a few U.S. universities with select admissions requirements (where no credit is considered for the classes préparatoires thus underestimating the value of the Grandes Écoles degree programs) have been interpreted as being the norm on a national level by those outside the country. Given that we have over 3000 colleges and universities in the U.S., each with its unique set of admission criteria, adhering to a perspective practiced by a select few does not imply a national standard. We all agreed to continue the discussion by organizing a webchat and a visit to the Fulbright office in the near future to speak about these issues with French students wishing to study in the U.S.. To be continued…stay tuned!