Brief Overview: Armenia is the smallest of the former Soviet republics. It sits landlocked and earthquake ridden in rugged mountains tucked between Turkey (to the west) and Azerbaijan. It covers an area of 29,743 sq km.(slightly smaller than Maryland). It has a population of 3,060,631 (July 2014 est.) with 1,079,000 residing in its capital, Yerevan. The languages spoken are Armenian and Russian. Its religion is Armenian Apostolic. In A.D. 301, Armenia became the first Christian nation.

In the communist era, Armenian education followed the standard Soviet model of complete state control (from Moscow) of curricula and teaching methods and close integration of education activities with other aspects of society, such as politics, culture, and the economy. After the collapse of the Soviet Union, Armenia gained its independence on September 21, 1991.

Here are some fast facts on higher education in Armenia post 1991:

2. The Ministry of Education and Science is the authorized state body for education and responsible for developing and implementing state policy/strategy and for legislation in higher education. The Ministry is also a source of funding and exercises an oversight and auditing function.

3. The State Licensing and Accreditation Service were established by the Ministry and are responsible for the central accreditation system.

4. The National Centre for Professional Education Qualify Assurance Foundation (ANQA) which was established on December 2, 1008, is an independent foundation responsible for promoting quality at higher education level.

6. There are 26 state higher education institutions. The number of private Universities as of 2011 is counted to be 41. 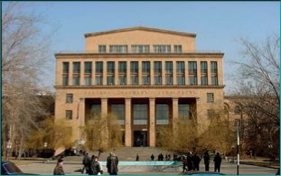 7. In 2004, a system based on two cycles: Bachelor (bakalavreat) – four years and Master (magistros) – two years was introduced by the Law on Higher and Postgraduate Professional Education and by a government decree.

8. Since 2005, all state and private universities in Armenia have transferred their programs to the two-cycle systems.

9. The status of the previous specialist’s qualification (five years) has been equalized to the Master qualification.

10. Ph.D. program is also implemented within the framework of high education. The first level of Ph.D. studies starts with the researcher program which lasts three years. A Ph.D. student engaged in doctoral research, prepares scientific thesis and on successful defense of a thesis is awarded with a Ph.D. (Candidate of Science) degree.

12. The types of tertiary education programs and institutions offering these programs include:

b. Universities – offer bachelor, master and postgraduate and doctoral degree programs and provide opportunities for scientific research and study.

c. Institutes – offer specialized and postgraduate academic programs and scientific research in a number of scientific, economic and cultural branches

d. Academies – focus on offering programs aimed at the development of education, science, technology and culture in an individual filed, as well as postgraduate academic programs.

13. To qualify for the Bachelor/Master degrees, assessment is based on a mid-term exam and an exam at the end of the semester, upon which the final mark is defined. Progress to the next semester/year of study requires a satisfactory final mark of 8 out of 20.

14. According to legislation, staff at the higher institutions is divided into the following categories: professors, associate professors, candidates of sciences and doctors of sciences. Staff is selected by open competition.

15. At this time, the National Academy of Sciences is favored over universities as it provides better research conditions. The various research institutes coming under the NAS receive direct funding from the government, while higher education institutions receive their funding through the Ministry of Education and Science.