In the aftermath of Hurricane Maria and the devastation it has wreaked on the island of Puerto Rico and displacing more than 3.3 million of its inhabitants, we are dedicating this week’s blog to Puerto Rico and its people.

Status Updates: You can get the latest status report from the Government of Puerto Rico by going to its website and FEMA posts up-to-date resources and information on the federal response to Hurricane Maria on its website.

Here are some facts on Puerto Rico we would like to share with you in this blog:

4.  Original Name: The original name of the island given by the Taino natives was Borikén. Today the name Borinquen is widely used.  Puerto Ricans proudly call themselves boricuas which carries pride and love for their island. (Source: IslandsofPuertoRico.com)

7. History/Origins: Puerto Rico was populated for centuries by aboriginal peoples before 1493 when it was claimed by the Spanish Crown following Christopher Columbus’s second voyage to the Americas. In 1898, after 400 years of colonial rule that saw the indigenous population nearly exterminated and African slave labor introduced, Puerto Rico was ceded to the US as a results of the Spanish-American War. Puerto Ricans were granted US citizenship in 1917. Popularly elected governors have served since 1948. In 1952, a constitution was enacted providing for internal self-government. In plebiscites held in 1967, 1993, and 1998, voters chose not to alter the existing political status with the US, but the results of a 2012 vote left open the possibility of American statehood. (Source: US Central Intelligence Agency)

8. Geography: Capital of Puerto Rico is San Juan. Puerto Rico is located in the Caribbean; it is an island between the Caribbean Sea and the North Atlantic Ocean, east of the Dominican Republic. It has an area of 9,104 sq km and slightly less than three times the size of Rhode Island. (Source: US Central Intelligence Agency)

9. Government: Puerto Rico is an unincorporated, organized territory of the US with commonwealth status; policy relations between Puerto Rico and the US conducted under the jurisdiction of the Office of the President. It is a presidential democracy; a self-governing commonwealth in political association with the US. (Source: US Central Intelligence Agency)

10. US Citizens: As mentioned earlier, residents of Puerto Rico have been considered as US citizens since 1917, when the island was ceded to the United States at the end of the Spanish-American War. However, Puerto Ricans do not pay federal income tax to the Untied States and they do not vote in US presidential elections. (Source: Encyclopedia.com)

11. Language: Spanish and English are the official languages of Puerto Rico, but Spanish remains dominant among the residents. The issue of language has been an ongoing concern between residents and US authorities. A 1902 law established both languages for official use, but US officials pushed for many years to make English the dominant language in school and government use. In 1991, the Puerto Rican legislature issued a bill making Spanish the official language, but this decision was reversed in 1993, restoring both languages to official status. Puerto Rican Spanish contains many Taino influences, which can be found in such place-names as Arecibo, Guayama, and Mayagüez, as well as hamaca (hammock) and coanoa (canoe). Among many African Borrowings are food terms like quimbombó (okra) , guince (banana), and mondongo (a spicy stew). Some English words are incorporate into Spanish in what is commonly referred to as “Spanglish.” (Source: Encyclopedia.com)

12. Economy: The island’s most important industrial products are pharmaceuticals, electronics, apparel, and food products. The sugar industry has gradually lost ground to dairy production and other livestock products in the agricultural sector. Tourism is the backbone of a large service industry, and the government sector has also grown. Tourist revenues and remittances from workers on the US main-land largely counterbalance Puerto Rico’s chronic trade deficit. Federal funds to the government and directly to the people have been important to the Puerto Rican economy. (Source: Encyclopedia.com)

13. Migration: Economic recession on the island has led to a net population loss since about 2005, as large numbers of residents moved to the US mainland. The trend has accelerated since 2010; in 2014, Puerto Rico experienced a net population loss to the mainland of 64,000, more than double the net loss of 26,000 in 2010. (Source: US Central Intelligence Agency)

14. Pharmaceuticals: Before Hurricane Maria, Pharmaceuticals represented 72% of Puerto Rico’s 2016 exports, valued at $14.5 billion, according to the U.S. Bureau of Labor Statistics. The island accounted for 25% of total U.S. pharmaceutical exports. The sector, which grew for years on the strength of tax breaks that were phased out in 2006, employed about 90,000 workers. On Monday, September 23, 2017, the FDA said it is taking active measures to help redirect production and preserve existing treatments to avoid a ballooning health crisis from Maria’s destruction. (Source: USAToday)

15. Island’s Chief Export: More than 70% of rum consumed in the U.S. came from Puerto Rico with Bacardi and Don Q as the largest producers on the Island. (Source: Trip Savvy)

16. History of Hurricanes: The word “hurricane” derives from hurakán, a term the Spanish learned from Puerto Rico’s Taino Indians. Puerto Rico, has unfortunately, been the victim of several severe hurricanes in the past century. Before Hurricane Maria, there was Hurricane Georges in 1998. On 7 October 1985, torrential rains created a mud slide that devastated the hillside barrio of Mameyes, killing hundreds of people; and considered the single most destructive landslide in US history. On 15-16 September 2004, Hurricane Jeanne, the tenth named storm and the seventh hurricane of the 2004 hurricane season, entered southeast Puerto Rico near Maunabo and traveled west then north across Puerto Rico and exited over the northwest tip of the island near Aguadilla. Following the storm, Puerto Rico was declared a federal disaster area. As the storm approached, the entire power grid of Puerto Rico was shut down by the government, indirectly causing over $100 million in damage and resulting in 600,000 people left without running water. Seven deaths were attributed to Jeanne and there was also landslide damage.(Source: Encyclopedia.com)

17. Energy Dependence: Puerto Rico has been totally dependent on imported crude oil for its energy needs. The island imports and burns oil to generate electricity. Oil has accounted for more than 90% of the island’s total primary energy consumption which means Puerto Ricans have been paying exorbitantly high electric bills for years. Millions of Puerto Ricans are living in the dark at home after Hurricane Maria ravaged the island in September 2017, knocking out its already fragile electric grid. Tesla CEO Elon Musk says his company can rebuild Puerto Rico’s power grid using batteries and solar power, saying the decision to accept his offer would be in the hands of the local government and the island’s residents. (Source: The Guardians of Democracy)

18. Education: U.S. schools are bracing for an influx of students from Puerto Rico because of the damage brought on by Hurricane Maria. Schools were already facing problems of an economic nature. In May 2017, Puerto Rico’s government announced that 179 schools were closing because of the territory’s $70 billion debt. To save $7 million, about 27,000 students were relocated to other schools. Serious damage to the University of Puerto Rico’s 11 campuses have also prompted sector leaders to raise concerns about an impending crisis in higher education for the region – with academics fearing that displaced students will fail to complete courses and that research will fall behind. Within hours of the hurricanes’ hitting, academic communities on both sides of the Atlantic began discussing how to provide relief and how to keep research on track. (Source: The Times Higher Education; NPR.org; InsideHigherEducation)

19. Mascot: Puerto Rico’s unofficial mascot is a tiny tree frog only found on the island known as coqui. The inch-long amphibian has a powerful and melodic voice, and its high-pitched, chirrupy song can be heard for miles. The coquís sing from dusk to dawn, and while the locals find this a lilting lullaby, unsuspecting foreigners aren’t always comforted by their song. But they are a cute, much-loved symbol of Puerto Rico. (Source: Trip Savvy)

20. Damage to Ecology: The storm also flattened farms. Puerto Rico’s Department of Agriculture has said that 80 percent of crops could be lost. (Source: ABC News) 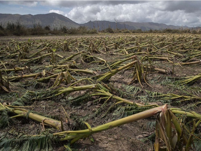 How You Can Help:

Relief Efforts: Refer to the list provided in these blog by Consumer Reports  and NPR.