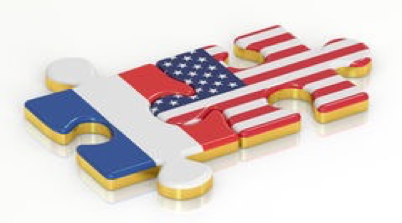 At the invitation of the Embassy of France in Washington, D.C., I had the pleasure of attending The Bilateral Seminar on The Transatlantic Friendship and Mobility Initiative, on May 14-15, 2018. I was joined by my AACRAO colleagues, Melanie Gottlieb and Julia Funaki, and fellow AACRAO IESC (International Education Standards Council) member, Robert Watkins from the University of Texas, Austin.

The Seminar was appropriately timed with the 70th Anniversary of the Franco-American Fulbright Commission (officially, the Commission franco-américaine d’échanges universitaires et culturels), a bi-national commission established between the United States of American and the French Republic by the Fulbright-Hays Act of 1961 (P.L. 87-256) and the Franco-American Treaty of May 7, 1965.  The Commission administers the Fulbright Program in France and operates the US State Department’s EducationUSA advising center for France. Those in attendance included representatives from the various branches of the French Ministry of Foreign Affairs, the Ministry for Higher Education, Research and Innovation (MESRI), officials from the French Embassy and French Consular Officers in the U.S., University Vice-Presidents from French institutions, representatives from the U.S. Department of State and the U.S. Department of Education.

From the onset, we learned that France is investing heavily in upgrading its university system and is aiming to position itself on the cutting edge of research and innovation. In his opening remarks, Frédéric Forest, Ph.D., the Deputy Director, Directorate General for Higher Education and Professional Integration at the MESRI, spoke of the importance the French President, Emmanuel Macron is placing on science and technology.  He noted that France is investing massively in its higher education.  It’s worth noting that in 2018, the French government spent roughly 72 billion euros for education; the second highest ranking expenditure on the budget after tax repayment and abatement and before defense.

Reforms also include access to higher education and reinforcing student mobility. France is committed to double the number of U.S. students studying at its HEIs and the same to have its students attending U.S. HEIs.  Dr. Forest concluded that France and the U.S. Department of State signed a declaration supporting these bilateral initiatives that encourage student mobility between the two countries.

Goals of the Bilateral Seminar

The goals of the Bilateral Seminar were laid out by Minh-Ha Pham, Ph.D., Scientific Counselor at the Embassy of France in the U.S.  Echoing, Dr. Forest’s remarks, Dr. Pham noted that in 2014, U.S. and France signed a declaration to double the numbers by doing the following:

Nadine Van der Tol, Ph.D., North America Program Manager for Higher Education and Research, and Student Mobility, MESRI, noted that the U.S. has been France’s leading scientific partner.  In 2017, 16% of French scientific publications involve U.S. partnerships, yet while French students rank 17th on the list of countries sending students to U.S. HEIs, the number of American students studying at French HEIs is very low.   Finding out how France and U.S. can cooperate to help increase the number of U.S. students studying in France was a goal Dr. Van der Tol hoped to see accomplished by the end of the seminar.

The French representatives agreed on the importance of U.S. community colleges and indicated that their primary focus is on attracting this population of students who may not be aware of study abroad opportunities, don’t have the financial means and deserve access.

Speakers also cited variety of programs already in place that offer funding and grants supporting study abroad opportunities.  One example is the Benjamin A. Gilman International Scholarship,  a program of the U.S. Department of State that enables students of limited financial means to study or intern abroad.

Another program was introduced by James Hicks, Ph.D., Program Director, Louis Stokes Alliances for Minority Participation (LSAMP).  Dr. Hicks reported that since its inception, LSAMP has helped over 600,00 students.  LSAMP’s overall goal as cited on its website is to “assist universities and colleges in diversifying the nation’s science, technology, engineering and mathematics (STEM) workforce by increasing the number of STEM baccalaureate and graduate degrees awarded to populations historically underrepresented in these disciplines: African Americans, Hispanic Americans, American Indians, Alaska Natives, Native Hawaiians, and Native Pacific Islanders.” LSAMP is a congressionally mandated national science foundation program and offers help to two-year and four-year institutions. Undergraduate research is a key component of LSAMP and to achieve this, LSAMP supports study abroad by offering $5000 for a summer study abroad program that includes a visit to a national laboratory.

There is also the Chateaubriand Fund which was created in 1981 to encourage young American scientists to perform research in France.  Fellows receive a monthly stipend of up to 1400 euros, paid round-trip ticket to France and support for health insurance.  Each year, the Chateaubriand program gives about 50 grants.

The Thomas Jefferson Fund is a newly formed fund set up to address the world’s most challenging problems.  Since President Trump’s announcement of the U.S. withdrawal from the Paris Climate Agreement, France is amplifying its STEM, Health and research programs at the graduate and doctoral levels by launching several funds and grants to attract qualified talent. This is demonstrated in President Emmanuel Macron’s “Make Our Planet Great Again” initiative and by the 12million euros committed to the MESRI and the Ministry of Europe and Foreign Affairs in achieving this goal.  Representatives from MESRI noted that in just one month they have received over 600 applications from scientists and researchers from around the world.  Needless to say, they had not expected such an overwhelming response in such a short time.

Since mutual recognition of degrees between the French and American HEIs was part of the discussion, my AACRAO colleagues Melanie Gottlieb and Julia Funaki presented an overview of the U.S. system of accreditation of HEIs and explained the credit system at the undergraduate and graduate levels.

As the Seminar came to a close, it was clear that France is serious about meeting its goal of doubling international student numbers both as a host country and for study in the U.S. The French government has allocated funds to support international student and scholar exchange, through its “Make Our Planet Great Again” initiative, partnerships with U.S. community colleges and launching innovative programs such as the two-week all expenses-paid boot-camp for community colleges students to visit France, refining the visa application for students, providing English as a language of instruction to attract students to public universities, and exploring ways to offer paid internships to students enrolled in the exchange programs.  The U.S. in turn has several programs already in place that support U.S. students with their study abroad goals. In closing, the shared sentiment amongst several delegates was that universities in France and the U.S. can achieve their bilateral goals in student mobility through partnerships that foster mutual recognition of their degrees, offering dual degrees, and incentives such as paid internships and experienced-based learning objectives.

One response to “The Transatlantic Friendship and Mobility Initiative: Bilateral Seminar May 14-15, 2018 Embassy of France, Washington, D.C.”