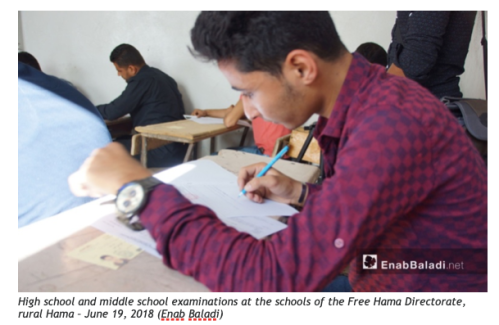 Syria’s brutal civil war that began in 2011 has created the world’s largest displacement crisis, with almost 5.7 million registered refugees, including more than 2.5 million Syrian children now living in Egypt, Iraq, Jordan, Lebanon and Turkey. (In 2016, we posted an extensive piece on the Syrian conflict and its impact on the education system and the millions of its citizens who have been displaced. Click here to read more.)

The civil war has led to the creation of the Syrian Interim Government, an alternative government or a government in exile of the Syrian Opposition, which has been formed by the opposition umbrella group, the National Coalition for Syrian Revolutionary and Opposition Forces. The interim government is seated in exile in Turkey. Its headquarters in Syria are located in the city of Azaz in Turkish-occupied northern Syria.

In effect, at this time, there are 2 governments in operation representing Syria: the Syrian Arab Republic (SAR) led by President Assad and the Syrian Interim Government (SIG). Because of the conflict, the Ministry of Education (MOE) in SAR has placed the entire curriculum of secondary education on-line to allow for students to self-study. In this case, students will not receive a report card or transcript for each year of study. The only document they will receive is the certificate for final exams for the Secondary Baccalaureate which provides them access to tertiary education at the universities in Syria.

In direct opposition to the government of President Assad, the SIG’s MOE has instituted its own secondary curriculum for those in the Turkish refugee camps and Syrian schools in Turkey and offers its own Secondary Baccalaureate examinations. The Interim Government’s MOE is working closely with the MOE in the Turkish government to coordinate efforts between the two ministries to oversee all Syrian schools in Turkey. It is also discussing how Syrian university students living in exile can be admitted into Turkish universities to continue their education and qualify for scholarships.

Until recently, Turkey, and with some limitations, France, had been the only countries recognizing the Secondary Baccalaureate examinations administered by the Syrian Interim Government. But on March 11, 2019, the MOE under the Syrian Interim Government announced that its diplomas are being recognized by several European universities in the United Kingdom, Germany and Sweden. The diplomas are not recognized by the Syrian Arab Government’s MOE and any Syrian returning to Syria will not be granted admission to the universities based on the SIG MOE’s Secondary Diploma.