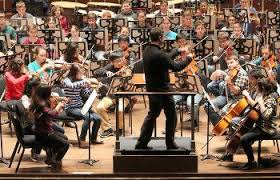 With Venezuela in turmoil,  the future of El Sistema, funded by oil revenue, may be jeopardized. It seems, however, that like a lesser-known youth orchestra in Tijuana may have a bright future. You don’t typically associate classical music with Tijuana, but the Tijuana Youth Orchestra gives the lie to that assumption.

The story begins in January 1991, when the Soviet Union was breaking up. Eduardo Garcia Barrios was studying conducting in Moscow at the time. Barrios and his musician colleagues wanted to start a youth orchestra somewhere; that somewhere turned out to be a world away, in sunny Baja, Mexico. Barrios, along with a Russian harpist, Elena Mashkovtseva, moved across the globe from icy Russia to Baja, and founded the Baja California Orchestra for adults. The enterprising Barrios also founded REDES 2025, a program to train at-risk young people to become classical performers. In a Independent Producer’s Project feature, he told journalist Sam Quinones, “Music has this power. To play music you need discipline, to understand your body. It’s 120 kids doing one thing at the same time…it would be cheaper to make football teams, but music provides something different, spiritual order.”

Those words could have come from the much more famous Gustavo Dudamel. Both men, however, are doing the same thing: transforming young lives with the power of music.

Listen here to the NPR / KCRW feature. And watch a clip of the Tijuana Youth Orchestra — it’s a big orchestra, not as big as the Simón Bolivar, but big nevertheless. Have a look: